W9JOZ, Bob Barrett - one of the first Hams in Starke County

Bob lived on 200 East just a little South of 50 South on the West side of the road. You couldn’t miss his place because of the antenna farm. The old house is still there; it has a large bay window in front.

Bob's ham shack was just South of the house in an old milk house and was either built around or was next to a very tall windmill tower.

Bob was an excellent CW operator and at times had conducted ham radio classes at the old airport (where Five Star is now).

Bob was a mason by trade and we are told that he was a good one.

Rollie, K9VCM said Bob was buried in Round Lake cemetery.

The Starke County Club honors Bob Barrett by using his callsign as the Club Station Callsign.

From: Gary Howell, WA9RZY (Bloomfield IN) I am 56 years old and have been in Ham Radio since 1966. I recently, retired from the USPS as a City Letter Carrier with 37 years of service.

Bob Barrett, W9JOZ was indeed a very good CW operator. I remember my father, Lewis Howell, W9YEA taking me over to see Bob and remembered listening to him send CW with his electronic keyer. I believe he was a net control operator on a CW net which was on 20 meters. He did have a heavy smoking habit, because I remember the floor just being covered with cigarette butts. He was into wood working pretty heavy too.

He used to have some high power rifles he used to let me shoot from his table out in his back yard. He let me shoot a 5 gallon barrel filled with water down in his pasture with a .222 swift. You could barely see the barrel with your naked eye, but with a steady rest on his specially made table and a scope I literally exploded that barrel which I remember like it was yesterday !

Bob was a very good mason and had worked on the Valparaiso University Tech College buildings when they were built. My Dad would remember a lot more about Bob.

This is W9yea Lewis, now in Bedford IN.

I moved to Knox, in 1945 from Hamlet ,IN. with my Dad, and MOM.
At that time there were two Hams in Knox W9ASX Glen Rogers (now sk) and Jack Andrews W9YWE, who now lives at 885 N. Broadway, Greenfield, IN . I met BOB after I got my call W9YEA in 1953 , Bob went to Chicago, FCC to get a new call. He was a (9y?) back in the 20's and had a spark xmitter. Bob and I were long time buddies till I moved to California in 1960. Bob built the block building in his Mother's back yard and put his radio room in it , He and I put up the windmill tower and a 20 meter beam on top of it, also a 3 wire dipole, that he sent CW on QIN for years. He was Divorced and had one child. Rollie K9VCM learned the code from BOB or may have had code in the service and got on the Air with both of us. I still work W9YWE, and K9VCM till he got sick, and I am on the air (HF,CQ100, Echolink and Two mtrs).
So don't think BOB was the first ham in Stark county. Although he was the most active. 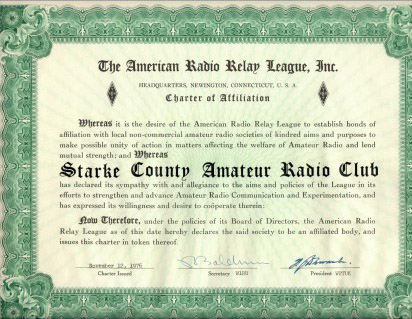